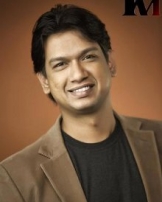 Vijay Prakash is a playback singer from Mysore who moved to Mumbai in 1996. He has sung in Hindi films such as Yuvvraaj, Kaal, Swades, Lakshya, Matrubhoomi, Tere Naam, and Cheeni Kum.

He has also sung a song in the Hindi film, Blue. He has also performed in Kannada,Tamil, and Telugu movies. He has also hosted the Kannada reality show Sa Re Ga Ma Pa on Zee Kannada and does fusion shows with Ustad Zakir Hussain.

He is also one of the four singers credited for the song, "Jai Ho", which won the 2008 Academy Award for Best Original Song. Specifically, he sang the portion with the words "Jai Ho" that takes an extended high pitch at numerous junctures of the song. The song was nominated for the 52nd "Grammy Awards" in the categories "Best Song Written For Motion Picture, Television Or Other Visual Media " and the album for "Best Compilation Soundtrack Album For Motion Picture, Television Or Other Visual Media".

Prakash was born in Mysore, India to Carnatic singers L. Ramashesha and Lopa Mudra Prakesh, and is himself trained in Carnatic music. He attended Sri Jayachamarajendra (SJC) Engineering College in Mysore.

After moving to Mumbai in 1996, he became a student of Suresh Wadkar. Prakash was a participant in the program Sa Re Ga Ma on Zee TV, hosted by Sonu Nigam. He made it to the mega-finals in 1999. Later, he compered Sa Re Ga Ma Pa on Zee Kannada.

He got his first break in Hindi cinema with the Karisma Kapoor starrer Baaz in 2002, and his first song for A. R. Rahman was in Ashutosh Gowariker's Swades followed by the same composer's Tamil title track for the movie New.

He has sung for about 25 foreign films including a Chinese film with music by Surender Sodhi. He has recorded for ads like "Kabhi chatpataa" for Knorr Soups and "Na sar jhuka hain kabhi" for HDFC Life Insurance.

In 2008, he sang the "Condom a capella" ringtone composed by Rupert Fernandes and produced by the BBC World Service Trust for an Indian safe sex campaign. In 2009, his song, "Jai Ho" won the 2008 Academy Award for Best Original Song.

He was one of the judges in Confident Star Singer 2 (Kannada), which was aired on Asianet Suvarna from 7-8 pm on weekdays.

Prakash's brother, Paneender Prakash, is an artist. Prakash is married to Mahati, a Malayalam playback singer.