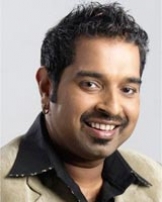 Shankar Mahadevan is an Indian singer and music composer. An accomplished musician in Tamil cinema, he is a part of the Shankar Ehsaan Loy trio team that provides music to Bollywood films.

Shankar Mahadevan was born in Chennai, India into a Tamil family, and grew up in Mumbai. He learned Indian Classical Music and Carnatic music in his childhood and started playing Veena at the age of five. He played Veena in the first song of Bhimsen Joshi and Lata Mangeshkar together composed by Shrinivas Khale.

As of now he sings songs in Hindi, Tamil, Malayalam, Kannada,Telugu, Marathi and Carnatic.

Though a software engineer by profession and having worked with Oracle Corporation, Shankar's interest in music made him venture into the field of music. He got his first award as a playback singer in Chennai film music, collaborating with A. R. Rahman and winning a National Film Award for his song in Kandukondain Kandukondain.

A prominent star in the Kodambakkam film industry, he later gained more recognition by releasing his first music album called Breathless. He later got into music direction and became a part of the Shankar Ehsaan Loy trio, composing music for Bollywood films.