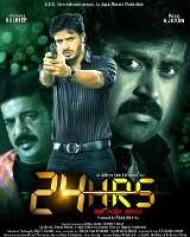 Thriller
Release Date : 03 Sep 2010
Cast : Kuldeep, Komal
Director : Aditya Sam
Synopsis
24 Hours movie revolves around a car racer  named Jagan.  He had a very competitive mind but he was hot tempered. One day he fought with another car racer named  Rocky.  Jagan was arrested by the police and for this reason his marriage engagement that fixed earlier was dissolved.

After this incident Jagan  became  an outcast.  When Jagan was sitting in a bar, an altercation  led to the death of a man. He was brother of a goonda named Ithar.  It was during this time Jagan met Gowri.