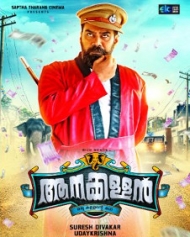 Aanakkallan is a Malayalam comedy movie, directed by Suresh Divakar. The movie star Biju Menon, Anusree, Siddique and Suresh Krishna in lead roles. The movie has its screenplay done by Udayakrishna. Alby Antony has wielded the camera for Aanakkallan. The story of Aanakallan revolves around a person named Pavithran, who is in a jail for a theft case. At the same time, he has been assigned with an undercover operation to find out a real culprit of a case, towhich Pavithran is allegedly connected. What happens rest has been narrated in Aanakallan.