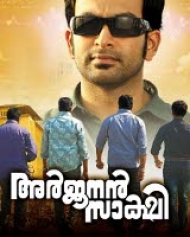 Drama
Release Date : 28 Jan 2011
Cast : Prithviraj Sukumaran, Ann Augustine
Director : Ranjit Shankar
Synopsis
Arjunan Sakshi is an upcoming malayalam movie directed by the young talented director Ranjith Sankar, Arjunan Sakshi is his second  directorial venture after ' Passenger'. Young super star Prithviraj would play the lead role in this film. He plays Roy Mathew a young architect who has spent his entire life abroad, and who finally arrives at Cochin with dreams of starting a life afresh. But he soon realises that the city that he gets to live in is radically different from the one that he had seen in his dreams.