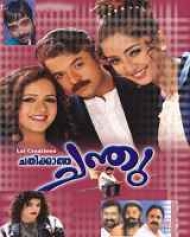 U | Drama
Release Date : 14 Apr 2004
Cast : Jayasurya, Navya Nair
Director : Rafi Mecartin
Synopsis
Chathikkatha Chanthu movie is tells the landlord (Janardhanan) to ask Chandu (Jayasurya) to ‘cheat’ his daughter, Indira (Bhavana) who loves him. Chandhu has no other go but to obey the rich man because he and his mother are solely depended him.

For cementing his ‘purported’ love with another girl and thus make Indira to retract from her way, Chandu did some foul play. But that ended by adding one more person (Navya Nair) to his company. Later, Chandu and the new girl reached in the group of film people! The incidents that followed it is disappointing due to lack of logic.