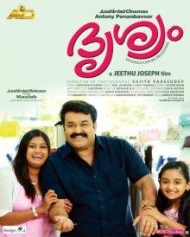 Drishyam is a Family entertainer, In which superstar Mohanlal potray's the character of Georgekutty a common family man struggling for daily breads. We can see Mohanlal completely as a down to earth Character without any stardom.

Yesteryear actress Meena will seen pairing opposite with Mohanlal. It would for the 7th time that the successful pair, Mohanlal and Meena joining together for a project.

Georgekutty is an orphan by birth, he discontinued his studies after fourth. Due to his hardworks he earned 5 acres of rubber plantation. later he married a tenth failed girl Rani(Meena) from a poor family.

GeorgeKutty and Rani is blessed with two daughters Anju and Anu, thery are very good in studies. He shares a cordial and amiable relationship with his two childrens. Suddenly all of his happiness came to an end, when Georgekutty and his family lands in a trouble. Movie story takes a new turn from there on.

Drishyam is directed by Jeethu Joseph after the megahit movie Memories, and is produced by Antony Perambavoor under the banner of Ashirvaad cinemas. Drishyam's Soundtrack and background score is composed by Anil Thomas and Vinu Mohan. Cinematography is handled by Sujith Vassudev.

Drishyam will be released on Dec 19th.
Click Here to see the Complete Cast & Crew Details.