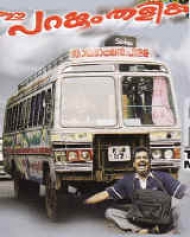 Ee Parakkum Thalika movie is about Unnikrishnan (Dileep) a young guy who roams around Kochi in an old dilapidated bus. When his father gets killed in a road accident, he sues the owner of the vehicle who offers him a bus as compensation.

Initially he is happy about the idea of being a bus owner, but soon he realizes that it is not easy to run a bus. One day they wake up to find a girl Basanthi (Nithya Das) sleeping in the bus. The girl refuses to leave the bus, inspite of constant efforts of Unni and Sundar.

But soon they realize that the girl was none other than Gayathri the only daughter of a minister in Pondicherry (P.Vasu). The poor little rich girl had to leave her home, as her father wanted her to join politics. But soon she is tracked down by police and taken back to Pondicherry.

Unnikrishnan realises that he cannot live without her and goes to her house where she is getting ready marry someone, her father has chosen. Unni and Sundar sneak into the minister’s bungalow and finally win over the girl’s father after a lot of comedy.