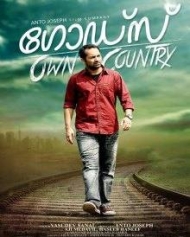 The movie which was previously named as Rare Emotional Day aka RED. Lena, Jaffer Idukki, Manikuttan and Nandhu are some of the other actors lined up for the movie.

God's Own Country is produced by Anto Joseph, Haseeb Haneef and Aji Medayil. Gopi Sunder scores music for the movie, which is all set to release on May 9th.