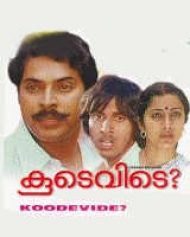 U | Drama
Release Date : 1983
Cast : Mammootty, Suhasini Mani Ratnam
Director : P. Padmarajan
Synopsis
Koodevide? movie goes on to show the story taking place between three characters Alice (Suhasini) who lives with her brother and who is a teacher at a convent school in Ooty. A neglected and unruly son of a MP Xavier Puthooran (Jose Prakash) who joins the school in Alice's class. Alice manages to turn him (Rahman) into a prize student.

Her boy friend Capt. Thomas (Mammootty) who feels intensely jealous of the attention Alice bestows upon Ravi. He kills the boy apparently by accident but later surrenders to the police, leaving Alice frustrated in all aspects of her life.