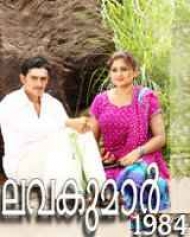 Romance
Release Date : Jul 2011
Cast : Arun Ouseppachan, Sruthi Lakshmi
Director : Jojo K. Verghese
Synopsis
Lavakumar 1984 movie tells the story of Parameshwaranasan is a famous astrologer who is very accurate in his predictions. He wishes to make his son also an astrologer. Thus he names his son as Lavakumar.

Lava Kumar lives according to his parents wishes. But he was a different person at his college. He used to change his clothes in his friend Jerry's house and goes to college as Kumar.

When he returns home, he will be his father's trustworthy son, who learns astrology. Lavakumar neither liked his name nor astrology. Since he was not in a position to disobey his father he continued studying astrology.

Lavakumar life changes with the arrival of Anjana. He and Anjana becomes lovers. Lavakumar quarrels with his father for Anjana. The happenings in...