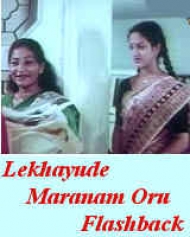 Drama
Release Date : 1983
Cast : Bharath Gopi, Nalini
Director : K. G. George
Synopsis
Lekhayude Maranam Oru Flashback movie is loosely based on the real-life actress Shobha who committed suicide . A poor Malayalee family reaches Madras to try luck for their daughter Shantamma in the film industry. She slowly starts climbing the ladder of success and become a popular actress Lekha. At the peak of her career she commits suicide by hanging herself. The film recounts events that lead her to suicide, including a stint as a prostitute succumbing to the pressure from her parents for the lust of quick money and her unsuccessful love affair with a director.