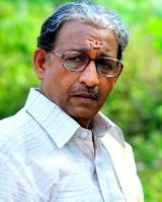 Nedumudi Venu was an Indian film actor (Malayalam) born on May 22, 1948. His actual name was Venu and it became Nedumudi Venu after he started his career in the Malayalam film industry. Venu was born to P. K. Kesavan Pillai and P. Kunjikkuttiyamma in Nedumudi, Alappuzha, as one of their five children. After graduating from Sanatana Dharma College, Alappuzha, he worked as a journalist in Kalakaumudi and as a teacher in a tutorial institute. He was involved in arts and music since his academic period.

Venu started his career in theatre and then went on to act in films. His first film was Thambu directed by G. Aravindan. He had shown his acting skills in the Bharathan film Aaravam. Padmarajan's Oridathoru Phayalwan was a milestone for him.

Venu wrote scripts for movies as well. He wrote the stories for films like Kattathe Kilikkoodu, Theertham, Sruthi, Ambada Njane, Oru Katha Oru Nunnakkatha, Savidham, and Angane Oru Avadhikkalathu. He also directed a movie named Pooram. He has also acted in a few Tamil films such as Kamal Haasan's Indian and Vikram's Anniyan. Venu has also acted in some television serials.

He won the Best Actor award for his role in 'Saira' at the Zimbabwe International Film Festival in September 2007. Saira was the only film from India to be included in the festival.

Death
The actor was under treatment at a private hospital and was suffering from liver related ailments. He passed away at 73 In Thiruvananthapuram.