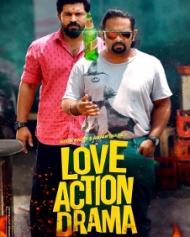 Dineshan (Nivin Pauly) is a carefree, alcoholic young man who comes from a wealthy family. He attends the wedding of his cousin, where he meets Shobha (Nayanthara). Dineshan manages to woo her and Shobha falls for him. However, a series of events changes their equation and badly hurts Shobha's feelings. Where Dineshan and Shobha's love-hate relationship takes them forms the crux of the story. Shaan Rahman composes the songs and background score for the movie.