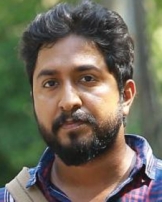 Vineeth Srinivasan is an actor, director, producer, screenplay writer, and singer who mainly works in Malayalam Film Industry. He is a well-known director in Malayalam Film Industry for his best-known films such as Malarvadi Arts Club ,Thattathin Marayathu, Thira, Jacobinte Swargarajyam, and Hridyam. He came to the film industry as a singer, and later he became famous as an actor, director, and screenwriter. Vineeth Srinivasan made his first film debut in the year of 2003, as a playback singer in the film 'Kilichundan Mampazham'.Later he made his first film debut with the Cycle in 2008. Two years later, he directed his first film 'Malarvadi Arts Club'.Since there, he directed superhits films like Thattthin Marayathu, Thira, Jacobinte Swargarajyam, and Hridayam .

He was born to prominent actor and screenwriter Sreenivasan and Vimala in Kerala in 1985. And he has a brother, Dhyan Sreenivasan who is also an actor in Malayalam Film Industry. Vineeth Sreenivasa did his schooling from Rani Jai Higher Secondary School, Kannur. Later he moved to Chennai , to pursue engineering. He married his long-time girlfriend Divya Narayan in 2012 and they have two children.


Vineeth Sreenivasa entered the film industry as a playback singer in the movie 'Kilichundan Mambazham'. The song became a super-hit and he got several opportunities in the industry. In 2006, Vineeth sang a song in the film 'Classmates', which is one of the celebrated songs in Malayalam. He got noticed through the song and later he is known as a playback singer in the industry. Since there he has sung in several films such as Udayananu Tharam, Speed Track,Big B, Veeralipattu, Ee Pattanathil Bhootham, Kunjiramayanam, Velipadinte Pusthakam, Aravindante Athidhikal ,Premam, Om Shanti Oashana a many more. He won SIIMA award for Best Male Playback Singer in Malayalam for the film Om Shanti Oashana in 2015.

Other than singing, Vineeth showcased his interest in the fields like acting, direction and script writing. As an actor, he made his debut in the film Cycle in 2008. Later he acted in the lead roles in successful films like Traffic and Chappa Kurisu. Apart from playing serious and thriller characters, he appeared in romantic and comic-centric films like Kunjhiramayanam,Makante Achan, Oru Cinemakkaran, Aana Alaraloadalaral and Manoaharam . Vineeth is also a successful director in Malayalam Film Industry.

He made his first directorial debut in 2010 through the movie 'Malarvadi Arts Club'. It was a commercial success and later he directed his second movie 'Thattathin Maraythu'. As a romantic musical movie starred by Nivin Pauly and Isha Thalwar in the lead roles. The film secured actor Nivin Pauly's position as one of the best young actors in the Malayalam film industry. The film was successful and collected Rs 18.9.crores at the box office.

In 2012, Vineeth won Asiavision Awards for Popular Movie and Man Of The Year for the film 'Thattathin Marayathu'. Later he directed the film 'Thira'with Shobhana and Vineeth's brother Dhyan in lead roles. The success of his other directorial films such as Jacobintea Swargharajayam and Hridyam proved himself as an established director in Malayalam Film Industry.

Vineeth made his first script for director G.Prajith's film Oru Vadakkan Selfie in 2015. His most recent directorial was Jacobinte Swargarajyam (2016).

Vineeth Srinivasan established a film production house 'Habit Of Life' in 2017 and produced its debut film Aanandam in 2017.