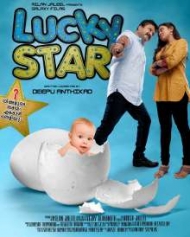 Drama
Release Date : 08 Mar 2013
Cast : Jayaram, Mukesh
Director : Deepu Anthikad
Synopsis
‏Lucky Star tells the story of Ranjith, whose aim in life is to become a rich man and thus to lead a happy. In order to become a billionaire he thinks of two ways, either to take a lottery ticket or to become a film star.

But both the attempts failed miserably. In his attempt to become a film artist he comes across junior artist Janaki. Their friendship soon develops into a love affair and eventually they get married.

Then both of them together think of a new idea to become rich and that is surrogacy. Thus Ranjith and Janaki meet infertility specialist Dr Joseph Chittilappally and convey their intentions. But the turn of events take them to more troubles.