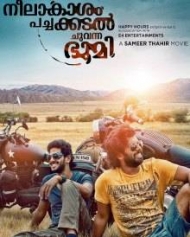 Neelakasham Pachakadal Chuvanna Bhoomi (NPCB) is an upcoming movie directed by Samir Thahir. The movie is getting released on August 9. Dulquar Salman and Sunny Wayne are playing the lead roles in the movie. Manipuri actress Surja Bala and Ena Saaha are playing the female leads in the film
Its a story of college friends who go on a road trip from Kerala to Nagaland on motorbikes. The interesting incidents on the way and the reason behind their trip form the plot. The movie is special on more ways than one. Apparently, it is the first time that a malyalam movie is being shot in Nagaland.
There are four songs in the movie. All the songs are meant to be watched and not to be heard. The movie is all about a road trip. In short, all the songs are just average.
Music has been composed by Rex Vijayan. Songs in Chappu Kurishu and 22 Female Kottayam were his earlier compositions. But sorry to say, Neelakasham Pachakadal Chuvanna Bhoomi songs gets nowhere near to them.
The background score is good and quite impressive. Fresh and new background score can be heard in Neelakasham Pachakadal Chuvanna Bhoomi. Rex Vijayan, who is indeed a good guitarist has made the best use of it. Musician Sushin Syam's debut as a singer through 'Thazhvaram...' sounds impressive. Song 'Ami Hitmajare...', the song in Bengali by an unnamed singer, is the only one that will remain in your mind even later.