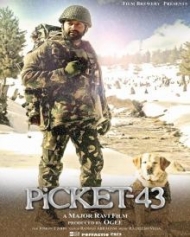 U | Action Thriller
Release Date : 23 Jan 2015
Cast : Prithviraj Sukumaran, Jaaved Jaaferi
Director : Major Ravi
Synopsis
Picket 43 is a Military based movie directed by Major Ravi, although the movie has military based background but its not a war movie. Picket 43 trying to showcase the tale of friendship between two soldiers of India and Pakistan.

Due to their close relationship unfortunately both landed in trouble, rest forms the main crux of the story. The Indian soldier is played by Prithviraj and bollywood actor Javed Jaffrey plays the Pakistani soldier.