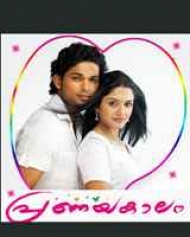 Romance
Release Date : 09 Jun 2007
Cast : Ajmal Ameer, Vimala Raman
Director : Udhayan
Synopsis
Pranayakalam movie tells the love story of young Renjith (Ajmal Ameer) and Maria (Vimala Raman) who are meet accidentally and eventually fall in love. The first time Renjith sees Maria, he is attracted to her and feels she is his girl.

Renjith's father Balagopal (Balachandra Menon) who is well employed in the Gulf and his family is well settled. Renjith's mother Rajani (Lekshmi Ramakrishnan) and his younger brother Arjun are the other members of the family.

Maria's father Varghese (Murali) who is an Assistant Sub Inspector of Police and is rather money minded and harsh towards his son Deepu, who is studying. Varghese hasn't talked to his wife Anna (Seema) for years, though the whole family lives in one and the same house.