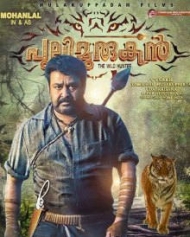 Puli Murugan aka Pulimurugan is the Malayalam action-thriller movie from the hitmaker Vysakh, the movie stars Mohanlal in the titular role.

The script work of the movie is solely handled by Udayakrishna of the 'Udayakrishna-Siby K. Thomas' scriptwriter duo. This is the first independent project of Udayakrishna. The movie narrates the story of Murugan(Mohanlal), an ordinary man who lives in a village near the forest area and his transformation from Murugan to Pulimurugan.

The music work of the movie is by Gopi Sunder, for the lines of Rafeeq Ahammed. Reportedly there will be four songs in this movie. First song "Kaadaniyum Kalchilambe..." sung by K.J. Yesudas and K.S. Chitra is already a hit within no time.

Pulimurugan all set to hit big screens on October 7, along with Mammootty starrer Thoppil Joppan.