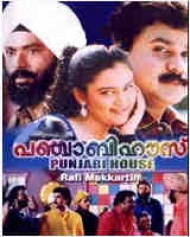 U | Comedy Romance
Release Date : 1998
Cast : Dileep, Mohini
Director : Rafi Mecartin
Synopsis
Punjabi House movie is all about Unnikrishnan (Dileep) who is a jobless youth has taken loan money from everyone he knows. But he couldn't pay back any of those. After facing lot of harassement, he decides to commit suicide after taking an insurance policy which can pay back his loans. He jumps into the sea, but gets caught in the fishing nets of Gangadharan (Cochin Haneefa) and Ramanan ( Harishree Ashokan) and reaches a distant place. They think that Unni is deaf and dumb and Gangadharan decides to keep him at 'Punjabi House', where he himself had taken a loan from. Unni meets Pooja (Mohini) there, who is also dumb.