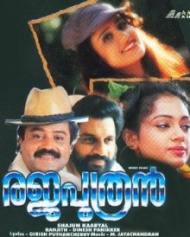 Action Drama
Release Date : 1996
Cast : Suresh Gopi, Shobhana
Director : Shajun Karyal
Synopsis
Rajaputhran is a 1996 Malayalam action-drama film directed by Shajoon Kariyal. It stars Suresh Gopi and Shobana in the lead roles.This was another script written by Ranjith for Suresh Gopi during an era when he was titled Supremestar. This was his third huge budget movie in 1996 with simultaneous release in Malayalam , Tamil & Telugu. Movie turned out to be a superhit at box office & also the first for Shajoon Kariyal. Movie was also praised for the stylish avatar of Suresh Gopi and acting put up by Murali. Movie managed to finish behind Hitler in 1996.