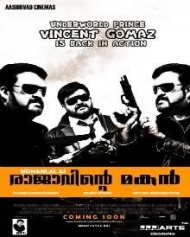 One of the most powerfull character of God's own superstar Mohanlal's Vincent Gomas is coming back.According to the film crew the sequel for the superhit movie "Rajavinte Makan" will be made soon.Thambi Kannandhanam will direct the sequel also.Mohanlal and Suresh Gopi will play the main character.According to some reports Bollywood diva Priyanka Chopra play the female lead role.It is not confirmed.