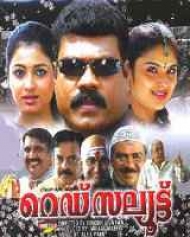 Action
Release Date : 12 Aug 2006
Cast : Kalabhavan Mani, Padmapriya
Director : Vinod Vijayan
Synopsis
Red Salute tells the story of Chala Vasu (Kalabhavan Mani), who is a head-load worker and a trade union activist. His father Karunan was an idealist who had committed suicide when Vasu was a child. For Vasu, the affluent businessman Joseph Thomas, who was his father's friend, is sort of a mentor and godfather.

The trade union leader Hamza too is a well-wisher and father-like figure for him. Madhavi Amma is like a mother to him. He also has some kind of a love for Kolapulli Govindan, who was another friend of his father though he didn't approve of Kolappulli's shady dealings.