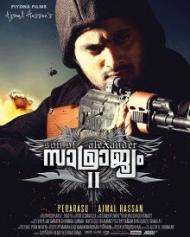 A | Action
Release Date : 05 Jun 2015
Cast : Unni Mukundan, Vijayaraghavan
Director : Perarasu
Synopsis
Samrajyam 2- Son Of Alexander is a malayalam gangster film directed by Perarasu. It is a sequel to blockbuster Samrajyam, In Samrajyam 2- Son Of Alexander Unni Mukundan plays the lead role of Jordan, who quite unexpectedly is forced to take charge of his father's empire after 13 years. Madhu and Vijayaraghavan do the same roles that they did in 'Samrajyam'. Mammootty starrer Praise The Lord fame Akanshapuri plays the lady love of Unni in this Movie. Manoj K Jayan, Riyaz Khan, Devan, Suraj Venjaramoodu and sruthi includes the other main cast.

The film's soundtrack and background score were composed by R. A. Shafeer and Ilaiyaraaja, with lyrics written by Sarath Vayalar, while Shekar...