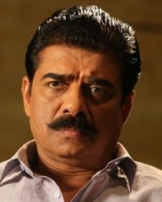 Vijayaraghavan is an Indian film actor of Malayalam. He is the son of popular drama and cinema artist N.N. Pillai.

Vijayaraghavan started his film career in the early eighties, but was not noted until his performance in the 1989 super hit Ramji Rao Speaking in which he played the title role villain Ramji Rao. Then he had portrayed many roles mostly tough characters. In the mid-1990s he played hero in a number of Malayalam low-budget movies.

The biggest hit of his career was Deshadanam directed by Jayaraj. He appeared in a few movies as second hero with Suresh Gopi in the lead role including the mega hit commissioner. He alo played notable roles in Independence, Sipayi Lahala etc.

In 2000's he turned to character and villain roles and appeared in a lot of hit movies like CID Moosa, Lion, Chotta Mumbai, Mayavi, Bharathchandran I.P.S and Ravanaprabhu.