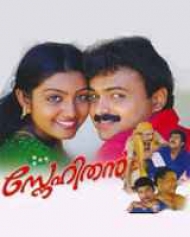 Snehithan movie tells the story of two pair of lovers. Malavika(Nandana) who is in love with Anand(Krishna) and Joji(Kunchacko Boban) with Ann Marry alias Anu (Preetha Vijayakumar).

The movie begins in a register office where Malavika (Nandana) waits for her lover Anand(Krishna) to come and register their marriage. She is accompanied by photographer Joji (Kunchako Boban) to cover the function. But when Anand does not turn up Malavika is forced to go with Joji.

Taking sympathy on her, Joji helps her to get a hotel room, which leads to more trouble for them. Cops arrest them during a raid in the hotel and Joji's girlfriend Anu (Preetha Vijayakumar) comes to know about this. To make things worse Joji lies to the police that Malavka is his wife and they are let free.

Malavika's parents come to know about their daughter's secret marriage and take the couple home creating more twist in the tale.