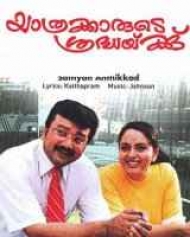 Yathrakarude Sradhakku movie revolves around Jyothi ( Soundarya) who is a software engineer gets a job in Chennai. On her way to join work, she meets Ramanujam (Jayaram) in the train. Ramanujam is an engineer working in the same city and soon they become friends. They part at the railway station but meet occasionally.

Jyothi finds it difficult to get a rented house and on insistence of their common friend Paul (Innocent) she starts sharing an apartment with Ramanujam. She treats Ramanujam as her close friend, but he has a silent admiration for her.

One day she shocks Ramanujam by inviting him for her engagement with Pradeep, and he goes for it along with Paul. But after getting drunk at the function, Paul blurts out to the invitees and Pradeep that Jyothi shared an apartment with Ramanujam in Chennai and soon the marriage is dropped. On the rebound Ramanujam ties the knot with Jyothi at the same muhurtham and they come to Chennai.

But Jyothi takes her sweet revenge on Ramanujam by not talking to him or accepting him as her husband. And Ramanujam finally decides to tell all the truth to Pradeep and sent her with him. Will Jyothi go with Pradeep in the climax?