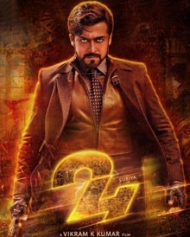 24 (Suriya's 24 Tamil Movie)  is a Tamil family entertainer film written and directed by Vikram Kumar. The film features Suriya and Samantha in the lead roles.
24 Story In Detail
‘24’ is the story of a watch, with which the owner can travel to the past and future and control the time.
Sethuraman (Suriya) is a brilliant scientist who creates a watch that could manipulate time. He calls it Project 24. However, his twin brother Athreya (Suriya, again), a dreaded don, wants the watch for himself, and therefore attacks his brother, killing his wife in the process.
Sethuraman escapes with his infant baby, with the villain close on his heels. Knowing that he has no escape, Sethu leaves his baby and his watch in a protective cover with a lady he meets on a train. Athreya catches up with his brother and kills him, but gets incapacitated in the process and goes into a coma for 26 years.
Click Here To View The Interesting Photos From The Movie '24'
Meanwhile that infant boy grows up to be a strapping young watch mechanic Mani (again Suriya), who, one fine day and a series of coincidences later, open that box containing the watch. Having his father’s intellect in his genes, Mani soon understands the magic of the watch.
He begins to manipulate time to his advantage, especially in hatching a romantic plot with pretty girl, Sathya (Samantha). However, Athreya wakes up from his coma and comes looking for the watch that could help him regain his lost youth. Thus begins a brilliant game of chess between the similar looking protagonist and antagonist with time travel as their chessboard.
Critics Reviews From All Leading Channels