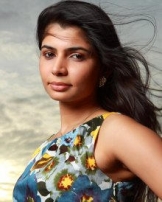 Chinmayi/Chinmayee/Chiinmayyi K Sripadaa is an award winning Indian playback singer who sings predominantly in Tamil. She made her singing debut in A. R. Rahman's Kannathil Muthamittal and since then has sung songs mostly in Tamil films like Enakku 20 Unakku 18, Boys, Arinthum Ariyamalum and Sandakozhi. Her songs to date are from the Hindi album, Guru, Veyil, Sivaji, Bheema, etc. She sings very well.

She was also a radio presenter on Aahaa FM 91.9 in Chennai, on a breakfast show titled 'Aahaa Kaapi Klub', which was aired from Monday to Saturday between 7 AM to 10 AM.

She inherited her talent in singing from her mother who also had been her Guru, Mrs.T. Padmasani. She also maintains her own blog. Her songs and pictures can be found on additional blogs that are linked to the main one. She also lent her voice to the song Ennadhuyire for Bheema.

Her first film song, the title song in Kannathil Muthamittal took the industry by storm. It was a dream debut - a brilliant composition by A. R. Rahman and superbly picturised by Mani Ratnam and well enacted by Simran and Keerthana. She has sung a few more numbers for A. R. Rahman besides other leading music directors.