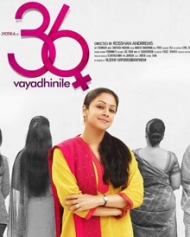 36 Vayathinile (aka) 36 Vayadhinile is a Tamil drama movie direction by Rosshan Andrews. The movie has Jyothika and Rahman in lead roles. This movie is a remake of Malayalam movie 'How OLd Are You'.
Jyothika makes her comeback in Kollywood through this movie. The movie is being produced by Actor Surya under his new production house namely '2D Entertainment'.
Story In Detail
A 36-year-old Vasanthi (Jyothika) is a UD clerk in the Revenue Department. Tamil Selvan (Rahman) Vasanthi's husband works at a company. Tamil Selvan aspires to emigrate to abroad, but Vasanthi can't accompany him as most companies turn down her job applications. There is nothing interesting about her life; she leads a mundane life, but she craves for a change.
One dramatic day, she has been ordered to be in the IG's office and she learns that the President of India would like to have a conversation with her. Unfortunately, the meeting turns out to be a disaster and she becomes the butt of social media jokes and before long, unfortunately her husband and daughter fly away to abroad.
View interesting photos from the movie 36 Vayathinile
Her old classmate Abirami, now a successful business woman, reminds her of the woman she used to be and inspires her to rediscover her younger self, a woman with big dreams and aspirations. Vasanthi finds herself face to face with almost every situation that a woman of her age goes through, the rest of the story leads to the climax with focusing on society's obsession with attaching gender and age specific stereotypes to women.
The film's soundtrack was composed by Santhosh Narayanan. The album was launched at Leela Palace, Chennai on 6 April 2015.