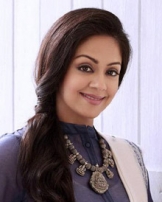 Personal life
Jyothika Saravanan was born to Chander Sadanah, a film producer, and Seema Sadanah on October 18, 1978 in Mumbai. She did her schooling in Chembur Muslim School in Mumbai. She has a half sister Nagma (original name Nandita) also an actress, from her mother's previous marriage.

Career
Her first movie was the Hindi film Doli Saja Ke Rakhna, directed by Priyadarshan. She proceeded to act in Kollywood films, where she debuted in a guest appearance in Vaali.

Her first Tamil movie as a lead artist was Poovellam Kettuppar with Surya Sivakumar. She starred in Kushi, for which she won the Filmfare Best Tamil Actress Award, Mugavari, Thenali and Dumm Dumm Dumm. In 2003 she starred in Dhool, Thirumalai and Kaaka Kaaka In 2004, she acted in her first dual role in Perazhagan and received the Dinakaran Best Actress Award, and the Tamil Nadu State Film Award for Best Actress.

In Chandramukhi she played a woman suffering from a mental illness for which she won another Tamil Nadu State Film Award. Her performances in movies like Vettaiyaadu Vilaiyaadu and Sillunu Oru Kaadhal followed. She also acted in the Radha Mohan-directed Mozhi, where she played a deaf and mute girl and in Gautham Menon's Pachaikili Muthucharam and in Manikanda.
Jyothika made her comeback to Tamil Cinema with 36 Vayadhinile, a remake of the hit Malayalam flick How Old Are You? (film).
Other work
Jyothika has endorsed several brands like Idhayam oil and Paragon footwear in the past. She was also the brand ambassador for RmKV silk sarees and Wardrobe Hub in Chennai. Later she appeared in ads for Aircel and Nescafé along with her husband Suriya. She also appeared in commercials of Comfort (fabric softener) and Santoor Soap