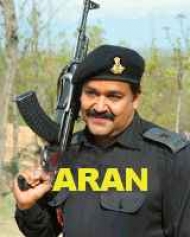 Action Drama
Release Date : Aug 2006
Cast : Mohanlal, Jeeva
Director : Major Ravi
Synopsis
Aran is the dubbed version of Malayalam movie Keerthi Chakra. The movie is about the works carried out by elite command force comprising eminent men headed by Major Mahadevan (Mohanlal). He is in charge of fighting the country’s terrorist groups and protecting the country from their terrorist intentions. Havildar Jayakumar (Jeeva) who is a trusted man of Mahadevan in the team, with his valorous ways contributes his mite for the success of the elite commandos.

When terrorists plan to strike at the famous Hazrathbal Shrine in Jammu and Kashmir, these men prevent the attack and eventually Mahadevan is saved by Jayakumar who lays down his life by killing the ultras.