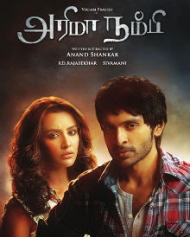 Arima Nambi is an tamil movie direction by debut director Anand Shankar a former assistant of A.R.Murugadoss. The movie starring with Vikram Prabhu, Priya Anand and with other leading stars.
Story
Arjun Krishna (Vikram Prabhu) and Anamika Raghunath (Priya Anand) get acquainted at  a pub following which they meet up for their first date. The night seems long as they down many drinks together and they head over to Anamika’s house to call it a night after a few more drinks.
While after they reach her apartment, a few goons break in and kidnap Anamika. Arjun somehow manages to escape and heads over to the police station to file a complaint. The police officer seems to think he is hallucinating as he is drunk but still sends over another police officer along with him to check his statement.
When they arrive at her apartment the watchman tells the police officer that Anamika did not come home for four days and that she was on a tour, they check the security video tapes and there is no sign of her there as well, they check her apartment and everything seems to be neatly ordered and lastly the police officer calls her father and also he confirms that his daughter went for an tour.
Almost convinced that Arjun is hallucinating the police officer drops him home and advises him to take rest. Is Arjun hallucinating? What happened to Anamika? Watch Arima Nambi in big screen to find out!
Drummer Sivamani is making his debut as a music director in the film. The film is shot by cameraman R. D. Rajasekhar and the editing is done by Bhuvan Srinivasan. The shoot of Arima Nambi started on 3 June 2013 in Chennai.
The movie had its premiere for celebrities and the technical crew at Sathyam cinemas on July 3,2014 and released on screens the next day July 4,2014.