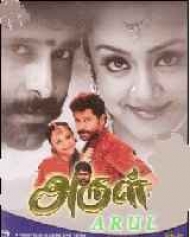 Action Romance
Release Date : May 2004
Cast : Vikram, Jyothika
Director : Hari
Synopsis
Arul movie is all about Arulkumaran (Vikram) who works in a mill, is the youngest of four brothers in a family of goldsmiths. Ever since taking the blame for something his brother did, Arul has been the black sheep of the family in his father's eyes and has vowed never to make a gold ornament again.

Kanmani (Jyothika) who moves into the opposite house, falls for him but Arul doesn't believe in love and keeps his distance from her. The setting up of the party office of the ruling party forces Arul to lock horns with Gajapathy (Pasupathy) who is the local MLA, and his brother Sethupathy (Thulasi), the party leader.