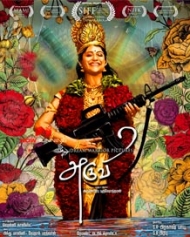 U/A | 2 hrs 13 mins | Drama Social
Release Date : 15 Dec 2017
Cast : Aditi Balan, Lakshmi Gopalaswamy
Director : Arun Prabu Purushothaman
Synopsis
Aruvi is a Tamil social drama movie written and directed by Arun Prabu Purushothaman. The movie has The movie is produced by Dream Warrior Pictures. The movie has Aditi Balan Lakshmi Gopalswami and Shwetha Shekar in the lead roles.
Story
A gentle girl born and brought up amidst the ever growing eco-social-consumeristic environment finds it difficult to fit in the society. She decides to take it hard on the people. What she does is the rest of the story. Aruvi speaks about the social anguish of a girl.
In June 2016, the film had its World Premiere at 19th Shanghai International Film Festival (2016) at Shanghai, China. First look poster of the film is revealed on 08 August 2017.