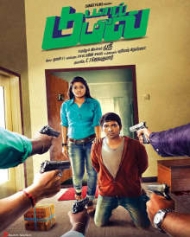 Damaal Dumeel is a 2014 Tamil black comedy-thriller film directed by Shree and produced by Jaikumar. The film features Vaibhav and Remya Nambeesan in the leading roles, while Sayaji Shinde plays another pivotal role.
Story
Mani Kandan (Vaibhav) lives in Chennai and he was working in an IT company with good salary and he enjoys with his lover Meera (Remya Nambeesan). Due to bad session the company terminates the top persons (including Vaibav) and discharge them.
Mani Kandan feels bad because next month his sister marriage, he want to make arrangements.
Kamatchi Sundaram (Sayaji Shinde) was captured for selling expiry medicines at that time he asks five crores to his partner Illavarasu (Kota Srinivasan) to escape from police. Illavarasu  and Kamatchi Sundaram both are doing illegal activities.
Mistakenly the amount was received to Mani Kandan, he feels happy, but unfortunately he kills two people. Why Mani Kandan killed the two people who are they and what's happen next is rest of the story to be watched in big screen.
Production
The film was launched in a low scale function on August 23, 2013 at the AVM Studios, Chennai with veteran director K. Balachander being the guest of honour. Shree, the debutant director, began working on the script after apprenticing under Shankar during the production of Enthiran, and noted that the film would star Vaibhav and Remya Nambeesan.
He revealed that it would be a dark comedy thriller film, with Vaibhav portraying a software engineer. The director reported in November 2013 that 85 percent of the film was complete, with only songs left to be shot. Thaman recorded a song with the lead actress Remya Nambeesan for the soundtrack.