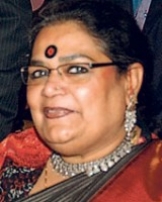 Usha Sami was born in a Tamil brahmin family that hailed from Tamil Nadu, in Madras (now Chennai) in 1947. Her father Sami Iyer, later became the police commissioner of Bombay. She has three sisters Uma Pocha, Indira Srinivasan and Maya Sami, all of whom are singers and two brothers, one of whom is named Shyam. She was the fifth of six children. As a child, she lived in the police quarters at Lovelane in Byculla in Bombay and attended a local school.

When she was in school she was thrown out of music class because she didn't fit in with a voice like hers. But her music teacher recognized that she had some music sense in her and so would give her clappers or triangles to play. Even though she was not formally trained in music, she grew up in an atmosphere of music. Her parents used to listen to a wide range from Western classical to Hindustani and Carnatic including Kishori Amonkar and Bade Ghulam Ali Khan on radio and she used to join them. She used to enjoy listening to Radio Ceylon.

Her next door neighbour was S.M.A. Pathan, who was then the deputy commissioner of police. His daughter, Jamila, inspired Usha to learn Hindi, wear salwar kameez and take up Indian classical music. This fusion approach helped her to pioneer her unique brand of Indian pop in the 70s.

Her first public singing occurred when she was nine. Her sisters who were already exploring a career in music, took her to a musician called Hamir Sayani who gave her an opportunity to sing on the Ovaltine Music Hour in Radio Ceylon. She sang a number called "Mockingbird Hill". After that, several appearances followed through her teenage years.

Uthup started singing in a small nightclub in Chennai called Nine Gem, when she was 20, wearing a saree and leg callipers. Her performance was so well received that the owner of the nightclub asked her to stay on for a week. After her first night club gig, she began singing in Calcutta at night clubs such as "Talk of the Town" and "Trincas".

She met her future husband Uthup in Trincas. After Trincas, her next engagement took her to Delhi where she sang at the Oberoi hotels. By happenstance, a film crew belonging to Navketan unit including Shashi Kapoor visited the nightclub and they offered her a chance to sing a movie playback. As a result, she started her Bollywood career with Hare Rama Hare Krishna. Originally, she was supposed to sing Dum Maro Dum along with Lata Mangeshkar. However, as a result of internal politics on the part of other singers, she lost that chance but ended up singing an English verse.

In 1968, she recorded covers of two pop songs in English, Jambalaya and the Kingston Trio's Greenback Dollar, on an EP, Love Story, and Scotch and Soda which sold very well in the Indian market. She also spent some time in London during this early period. She was a frequent visitor to Vernon Corea's BBC office at the Langham in London and was interviewed on "London Sounds Eastern" on BBC Radio London.

Uthup sang several songs in the 1970s and 1980s for music directors R D Burman and Bappi Lahiri. She also reprised some of R.D. Burman songs that were sung by others such as Mehbooba Mehbooba and Dum Maro Dum and popularised them to a distinct end.

She is a stage performer and gave performances all over the world and is known for her lively stage presence. She has been facilitated with several awards over the years, some of which include Rajiv Gandhi Purashkar for National Integration for quality music, Mahila Shiromoni Purashkar for international peace, and Channel [V] award for outstanding achievement.

She recorded her first album with Luis Banks for which she was paid Rs. 3500. Since then, she has recorded numerous albums. Usha's Hindi version of Michael Jackson's Don't Stop Til You Get Enough, titled '"Chhupke Kaon Aya'", can be found on the album Tom Middleton - The Trip (2004).

A cover of Gloria Gaynor's "I Will Survive" is on another Tom Middleton album, Cosmosonica - Tom Middleton Presents Crazy Covers Vol. 1 (2005). She then recorded a song called "Rhythm and Blues" with the Indian Rock Band Parikrama which appeared on Channel V on April 23rd 2007.

Uthup is also an actress, often singing and acting in India's signature musical films. She acted in "Pothen Vava" a Malayalam movie in 2006 as Kurisuveettil Mariyamma.

Usha's trademark is her massive bindi and her gajra (garland) that she wears in her head, as well as her Kancheepuram saris.

She is married to Jani Chacko Uthup since 1971, who is originally from Kerala. They have a daughter Anjali and a son Sunny.

She currently lives in Calcutta with her husband. She is considered an icon of modern Kolkata and is an active social presence in the city life.