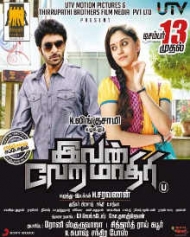 Ivan Vera Mathiri (English: He is different) is an upcoming Indian Tamil romantic thriller film directed by M. Saravanan and produced by Linguswamy under their production banner Thirupathi Brothers. The film stars Vikram Prabhu and Surabhi inlead. The background score and soundtrack is composed by C. Sathya.
Story
Vikram Prabhu (Gunasekar) plays a city-bred youth seething with anger which surfaces every now and then. He exasperate at some of the happenings in the society, he turns an angry young man. In between, he has romance in the form of Malini (Surabhi) then he teaches valuable lessons to the State Law Minister and his brother forms the crux of the story. .
Earlier Saravanan considered Arya and Vishal for the lead role in this film. Later he said that "I watched the trailer of Kumki and was impressed with Vikram’s intense performance. Later when I met him in person, his height, build and confidence made an impact on me. Moreover, his positive attitude and eagerness to take on challenging roles made me sign him up for my film".
It was reported that Monal Gajjar was selected for an equally important female role. It was then reported that Surabhi, a Delhi based girl was cast opposite Vikram.