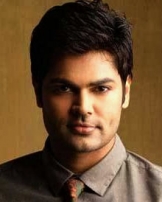 Ganesh Venkatraman is a Tamil language actor who appeared in the Tamil films, Abhiyum Naanum and Unnaipol Oruvan.

He was born and raised in Mumbai. His roots are in Tamil Nadu. Ganesh is an ex Gladrags Man-hunt Mr. INDIA 2003 winner and was amongst the top five finalist of the Super Model contest held in Istanbul-Turkey in the same year.

During his college days he actively participated in dramas/ramp shows which directed his focus towards modeling and acting. He even captained his college volley-ball team. After completing his formal education, this software professional was employed by a reputed IT company, where he worked for nearly two years.

Ganesh Venkatraman got engaged to actress Nisha Krishnan in February 2015, and the pair married in November 2015.

He participated in the reality show of Bigg Boss Tamil by Vijay TV.