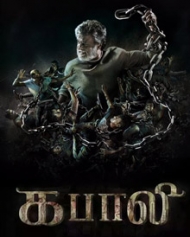 Santhosh Narayanan to compose music and Murali J to handle the Cinematography. Editing by Praveel KL.

Plotline
Rajinikanth spends 25 years of his life in jail, when he returns, he is in for a surprise, which is gradually revealed to the audience. Why was he locked up in a Malaysian jail for such a long period of time is shown in the flashback.

The rest of the film deals with what Rajini does to get back his lost life and how he achieves his prime task, for which he was jailed all these while. How he fights to save his world and help the downtrodden Tamilians in Malaysia forms the crux of Kabali.

Story in detail:
Kabali movie deals with the exremity of migrant Malayasian Tamilian community. Since 30 years, these workers used to work as drug traffickers under Chinese mafia gangs (Gang43 - Tony Woo). Situation changes when Kabaleeswaran (Rajini) who works for another mafia gang (under Sitaramaraj) decides to take stand for their community betterment and takes over the gang leadership on Sitaramaraj’s (Naazar) untimely death.

However, the violence of heading a gang takes its toll on Kabali’s family life, weaving into the movie a family element with the pursuit of Kabali’s wife. The rest of the movie comprises of Kabali and Gang43 trying to overpower each other.

Characterisation
Director Pa Ranjith reveals the character of Kabali movie. Kabali is a self confident, angry man. But he doesn't talk punch dialogues. He talks only thoughtful dialogues which will touch your heart. In Kabali Rajini Superstar has given a reality performance.

Radhika Apte has lived as garden worker 'Kumudhavalli'. We shot a song in Goa depicting the love between a husband and wife in the old age, she has given beautiful expressions.

Kabali runs a school for the kids, which got affected in the gangster fights, 'Kalaiyarasan' acts as the teacher Tamilkumarn. Attakathi Dinesh is the son of another gangster gets impressed by Kabali and he joins in Kabali's group.

John Vijay plays the role called 'Ameer' who is a friendly advisor of Kabali ; his role will have more values in the movie.

Dhanshika acts as a 'Yogi' in this movie, she changed her complete look with short hair cut. She challenges Kabali in the movie.

Actor Kishore is playing the role of Malaysian gangster who is opposite to Kabali. Taiwan born Chinese actor 'Winston Chao' is another big don who is challenging Villain for Superstar in Kabali.

Think Music has acquired the audio rights for all three languages – Tamil, Telugu and Hindi. The audio was released on 12 June 2016.

Initially the talk was started on May 3rd and it was officially announced on June 1st, 2015. The movie was shot in Malaysia within 60 days of the shoot and it continues at Thaliland, Hankong and Chennai with 60 days of shoot.