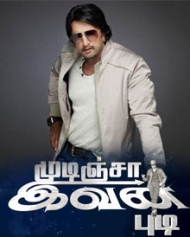 Mudinja Ivana Pudi is a bi-lingual (Kannada & Tamil) movie direction by K S Ravikumar. The movie features 'Naan Ee' fame Kiccha Sudeep & Nithya Menon in the lead.
The movie is being produced by Babu MB under Rockline Venkatesh's production house. The film will be produced by Rockline Venkatesh in Tamil and M. Babu in Kannada as Kottigobba 2, is not a sequel to Kotigobba (2001). D Imman is debuting in Kannada industry with this movie.
Story
Sudeep plays a dual character in this movie, namely Shiva and Satya one of which will be a thief and the other one an innocent. Police starts doubting on the innocent Sudeeep with some of the robberies happen in the city. Somehow Police think that there are no two Sudeep's but only one.
Who is the person behind the robberies? And did the innocent Sudeep, who looked upon suspiciously by the police to get justice? What is the link between both the characters? Is the rest of the story to be watched on silver screen.
Release
The Kannada and Tamil version of the film were released on 12 August 2016 coinciding the Varamahalakshmi Festival day. The theatrical release is expected to cross over 1000 screens with Tamil and Kannada versions releasing simultaneously in India and other nations.
The audio release of Mudinja Ivana Pudi was launched on July 20th and Kollywood stars Dhanush, Vijay Sethupathi and Siva Karthikeyan were seen as special guest for the audio launch.