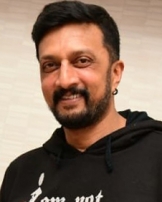 Sudeep, who is fondly called Kiccha by his fans, was a student of mechanical engineering at the Dayananda Sagar College of Engineering. He was also a college-level cricket player. Sudeep is married to Priya and has a daughter named Saanvi.

Sudeep acted in a TV serial before he went on to act in films. Titled Premada Kadambari and directed by Sudhakar Bhandari, it was aired on Udaya TV. His first movie was Thayavva, where he played the role of supporting actor Kadambari.

It was directed by Sudhakar Bhandari and aired on Udaya TV. His first movie was Thayavva, where he played the role of a supporting actor. His first two films, O Kusuma Bale and Brahma, were cancelled in the middle of production.

He then played a supporting role in the Sunil Kumar Desai-directed movie Prathyartha and landed the leading actor role in the same director's movie, Sparsha. In 2001, Sudeep acted in the hit film Huccha, which gave him his first big fan following.

Sudeep's first directorial venture was My Autograph. Sudeep acted in the Kannada version of the Tamil film Autograph and the Telugu film Swathi Muthyam. He had won the Filmfare Award for them two years in a row. Sudeep made his debut in Bollywood with the movie Phoonk.

Sudeep was the host for all the seasons of the Kannada version of the reality show Bigg Boss.