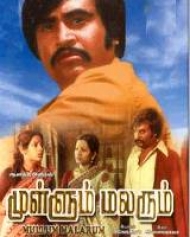 Mullum Malarum is a 1978 Indian Tamil-language drama film written and directed by J. Mahendran and produced by Venu Chettiar and V. Mohan, with a soundtrack by Ilaiyaraaja. The film, starring Rajinikanth, Sarath Babu, Fatafat Jayalaxmi and Shoba, marked Mahendran's directorial debut and is loosely based on Umachandran's novel of the same name. It tells the story of Kali, a winch operator who dotes on his sister and clashes with Kumaran, his superior, at a power plant; the dispute eventually costs him his left arm and his job.
The film's production was tumultuous. Chettiar opposed casting Rajinikanth as the protagonist because of his dark skin and typecasting as a villain at the time, but Mahendran refused to direct the film without the actor and Chettiar capitulated. Since Mahendran had no previous directing experience, cinematographer Balu Mahendra (a director himself) assisted Mahendran with the screenplay, dialogue, camera angles, casting and editing. The film significantly deviates from the novel, with Mahendran having read only a part of it. Filming lasted for roughly 30 days, and primarily took place in Sringeri, Ooty, Glenmorgan and Kundha. Chettiar was surprised that the finished film had less dialogue than visuals, which he did not expect from Mahendran.
Although Mullum Malarum opened to a tepid box office reception at its 15 August 1978 (Independence Day) release, positive reviews from critics and favourable word of mouth helped make it a success. Rajinikanth's performance as Kali received unanimous praise, and it is widely considered the best performance of his career. The film won the Filmfare Award for Best Film – Tamil and two Tamil Nadu State Film Awards: Best Film and a Special Prize for Rajinikanth, who also won the Arima Sangam Award for Best Actor
Mullum Malarum, a breakthrough for Rajinikanth, became a milestone in Tamil cinema; it focused on visual realism, without excessive melodrama, fights, duets or dialogue. The film's success inspired remakes in 1979 (Venalil Oru Mazha in Malayalam) and 1985 (Pyari Behna in Hindi).