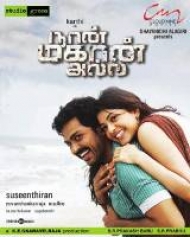 U/A | Action Romance
Release Date : 20 Aug 2010
Cast : Karthi, Kajal Aggarwal
Director : Suseenthiran
Synopsis
Naan Mahaan Alla is a thriller which revolves around the relationship between a rich father and his son. Karthik Sivakumar and Kajal Aggarwal in lead.The heart of the film is about the bonding of a serious father and a romantic son, laced with the criminal backdrops of Chennai.

Karthi plays the role of Jeeva, a typical middle-class Chennai youngster with a devil-may-care attitude, who is drawn into the world of crime and criminals after a particular incident changes his life. Jayaprakash after his superb performances in ‘Pasanga’ and ‘Naadodigal’, plays the role of Karthi’s father.