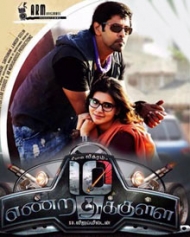 Pathu Enrathukulla (aka) 10 Enradhukulla / 10 Enradhukulla  is a Tamil movie direction by Vijay Milton. The movie being jointly produced by A R Murugadoss with Fox Star Studios. The movie starring with Chiyaan Vikram and Samantha in lead roles. Full Cast & Crew Details
10 Enradhukulla Plot:
Vikram plays a car driver who is known for his speed behind the wheel. He is a man without identity and any names. Attributed as the best driver in the whole of Chennai, the entire story revolves around him and his uber cool car stunts.
His life takes a turn when he comes across a beautiful girl (Samantha). On an unexpected turn, he is assigned by a bunch of hooligans to commute Samantha to a place in Uttarkand. 10 Endrathukulla gets transformed into a road film which might remind you of the Hollywood flick The Transporter.
Movie songs are done by D Imman and background score by Anoop Seelin.
Production
Vijay Milton collaborated with Vikram for his next film. Director AR Murugadoss was confirmed to be bankrolling the movie along with Fox Star Studios. D. Imman was signed on as composer for this film, which the composer confirmed through his official Twitter handle.
Samantha Ruth Prabhu was selected to play the female lead in the film, marking her first collaboration with Vikram. Pasupathy has been roped in to play an important role in the film.
It was confirmed that Bollywood actor Jackie Shroff would play the antagonist in the film, therefore making a comeback to Tamil cinema after Aaranya Kaandam (2011). In August 2014, Ramadoss of Mundasupatti (2014) fame was added to the cast and Manobala confirmed on his Twitter account that he too was part of the film.
The film's first schedule ran for 7 days covering Hyderabad, Ladakh, Sikkim and many major North Indian cities.  The climax of the film was shot in Cappadocia, Turkey.
Charmme will be seen in a song for this movie. The film team roped Racer Narain Karthikeyan for the action sequences with the racing car. Samantha said that this film is the toughest character she has played so far.
Soundtrack
D. Imman composed the music for the film with lyrics written by Madhan Karky. Imman, in an interview with Behindwoods, said that it gave the opportunity for him to explore racy music since the film was a road thriller.
Release
The teaser of Vikram and Samantha starrer "10 Endrathukulla" ("10 Enradhukulla") has been released on Thursday, 13 August. The theatrical trailer "10 Endrathukulla was released on Sep 30th and also trailer got attached Vijay's 'Puli' in theatres.
Audio album was released on Sep 6th, 2015. The movie was released on Oct 21st, 2015.