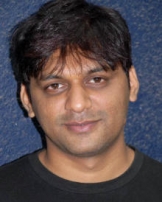 Anoop Seelin is an Indian film music director and playback singer in the Kannada film industry. He has scored music for films such as Gooli, Eddelu Manjunatha, Preethse Preethse, Yaksha, I Am Sorry Mathe Banni Preethsona, Manasology, Sidlingu, Parari and Madarangi. He won the Karnataka State Film Award for Best Music Director for his work in Sidlingu.

He has also composed songs and penned lyrics for Naanu Avana Avalu, Aatagara.

Anoop Seelin, born in Bangalore on 24 October, is a trained singer who always aimed to become a playback singer and music composer. After completing his primary and high school education in Hassan, Karnataka, Seelin, along with his family, moved to Bangalore to pursue higher education. Completing his LLB, he opted to become a lawyer.

Due to his classical singing background and the musical influence of his family members, he began singing in an orchestra in Bangalore and other groups as a hobby. This hobby caused him to pursue a career as a full-time singer, and he started working with the legend of the Kannada music industry, music director Hamsalekha.

He started working with Hamsalekha as a chorus singer. Over a period of time, he was given a chance to sing track songs for the compositions of Hamsalekha.

Break In The Kannada Film Industry

His break in the Kannada music industry came in when he got the chance to sing "Yaro yaro nannavalu yaro..." from the movie Ondagona Baa, followed by hit songs from movies like Sarvabhoma, Madana, Dharma, Janapada, Nenapirali, Sixer, and Thaballi.

After working with him for 6 years, Hamsalekha began guiding Seelin to become a successful playback singer. After great success in singing, he started to show an interest in music directing and began composing songs for the Kannada music industry.

Seelin was then signed on to compose the soundtrack for the Kannada movie Gooli. His second movie Yeddelu Manjunatha's audio was released and the songs were entirely different from what was then the industry trend. After Preethse Preethse, Seelin's next movie, I Am Sorry Mathe Banni Preethsona, was released in June 2011 and received positive reviews from critics, with the background score being deemed the highlight of the film.