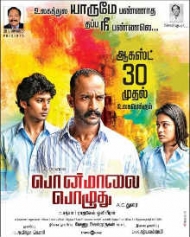 Ponmaalai Pozhudhu is an Tamil movie directed by AC Durai featuring Aadhav Kannadasan and Gayathrie in the lead roles. The film is inspired from a real-life incident. Cinematography is by Rajavel Olhiveeran. Music is by C.Sathya. Anupama Kumar plays hero's mother role in this movie.

The film highlights the thin line that divides infatuation and love.

It highlights how an increasing number of today's youngsters consider infatuation and love as one and the same. Simultaneously, the film also focuses on the role of parents in their child's upbringing, especially their teenage sons and daughters. The film subtly gives more importance to parenting than merely focusing on the teenage romance of its protagonists.

It points out that most youngsters resort to doing...