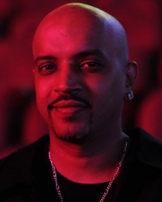 Blaaze (born Lakshmi Narasimha Vijaya Rajagopala Seshadri Sharma Rajesh Raman) is a Tamil rap artist and a popular playback singer in Indian films. An Indian by birth, born in Chennai, he grew up in Zambia and later did his education in England and in the US.

Blaaze was born in Chennai, Tamil Nadu, India, later raised in Kitwe, Zambia, educated in England and graduated from the Columbia College Hollywood, United States. His father being an architect, his family toured around the entire country, with Blaaze starting to perform break-dance on the sets his father designed, when he was 9. He then moved on to rapping and his music career began with a performance for President Chiluba of Zambia during the election campaign in October 1991 at the age of 16 and just 5 months later, he produced and performed in Zambia's first ever music video Advice 4 Livin' with the Zambian national broadcasting corporation.

Ten years later, in 2002, his entry into the Indian film industry happened, when A. R. Rahman appointed Blaaze to sing his first song in Tamil cinema, the Baba Rap for Rajinikanth's movie Baba. Thereafter, he performed for several Chennai film industry songs frequently under Rahman's direction on scores for Kangalal Kaidhu Sei, Boys, Enakku 20 Unakku 18, New, Aayutha Ezhuthu, Anbe Aaruyire and Hindi films like Saathiya, Yuva and Swades. He also worked as a lyricist on Kisna, Tehzeeb and even on the Mandarin film Warriors of Heaven and Earth, which all had musical score by Rahman as well. Other music directors from the film industry also started using Blaaze's rap talent in their films like Shankar-Ehsaan-Loy for Bunty Aur Babli, Yuvan Shankar Raja for Manmadhan and Vallavan and the likes of Harris Jayaraj, Joshua Sridhar, Deva inter alia for their films, respectively.

His popular songs are "The Boss,'" and "Style" for Sivaji: The Boss, "Hey Salaa" for Aegan, "Gangsta Blues" for Slumdog Millionaire and "Dilli-6" for Delhi-6.