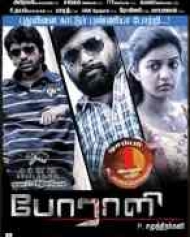 Poraali movie is all about a rebel who challenges society and the problems he faces as a result of his defiant attitude. Sasikumar plays the lead role in the film & also he is the producer of the film. Also there is a buzz that Sasi plays a dual role in the movie.

The heroines of this film are Swathi, Vasunthara and Nivetha.The movie is directed by Sasi's best buddy Samuthirakani. Kanja Karuppu & Allari Naresh are also acting in this film.